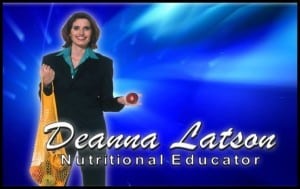 Deanna Latson has been involved in the field of health and wellness since 1999 and has served as a consultant, spokesperson, writer and guest lecturer for some of the largest colleges, universities and corporations in the world. Her clients include over 400 college and universities, corporations such as Smart Water, Pepsi Co. International, the American Heart Association and AT&T.

Deanna has been an NCAA grant-approved speaker for over 7 years, speaking to college sports teams about their health and wellbeing. She also has been a sought-after motivational speaker in the field of health and wellness for over
a decade.

As a master communicator, Deanna serves as the liaison between the ARIIX scientific advisory board and the field. She is living proof that it is possible to completely transform one’s own life through proper education and nutrition. During college, both Deanna’s parents became ill with life-threatening diseases, a situation that spurred Deanna’s own impetus to change her focus towards nutrition, especially because she had battled with an eating disorder for 11 years as well as numerous other health problems that had plagued her throughout her life. It was after her parents had an amazing transformation in their health, and after Deanna herself healed her own body through wholistic means, that she decided to combine her two passions and apply her speaking talents to the topic of health and wellness. She holds a Bachelor’s degree in communication studies with a special emphasis on organizational communication and a Master’s degree in communication studies with a special emphasis on health communications. Deanna also received her Clinical Nutritionist degree from the Natural Healing Institute. Over the past 16 years, Deanna has been dedicated to research and development in the field of natural health and well being. Helping audiences understand that the nutritional choices they make every day can have a profound effect on their lives, Deanna regularly shares her knowledge and insight on toxic chemicals in the home, the benefits of organic living, avoiding GMO ingredients and other health and wellness issues.

Deanna most looks forward to bringing some of the greatest minds in medicine on board the ARIIX team. Since 1999, she has had the pleasure of sharing the stage with some of the most influential people in the health and wellness field and it is those vital connections that will further benefit the ARIIX community.

Deanna and her husband of 12 years, Patrick, have 2 children and love to take spontaneous adventures all over the world. If you asked this family what their ideal vacation looks like, it would be a trip across the county in an RV with friends.