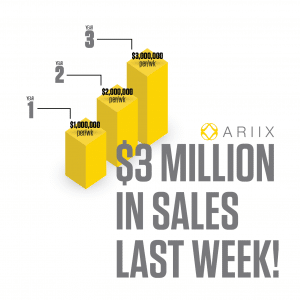 AND THERE ARE NO SIGNS OF SLOWING FOR ARIIX

According to the coveted Direct Selling Association 2013 Top 100 performing global company list, based on current sales, ARIIX is now in the top 100 and set to break into the top 50 within the next two years, making ARIIX one of the fastest-growing companies in history.

Just in the last year alone, ARIIX posted a staggering year-over-year growth rate that nearly doubled sales (93.9%). This was led by Japan, which grew at 150%, followed by Taiwan at 125%. The US, Canada and the Netherlands all posted significant growth rates at more than 45% each.

ARIIX President Mark Wilson credited ARIIX Representatives globally, saying,“We are proud to create premier stand-alone brands that provide products that our customers love. We compensate our Representatives better than anyone, and back them up with the most secure working contract in the industry. But there is no doubt that what drives this success is the quality of our Representatives.

We have the best team in the business. ”Dr. Fred Cooper, ARIIX CEO, agrees, adding, “We knew when we introduced our patent-pending compensation plan and Representative’s Bill of Rights, which are firsts in the industry, that ARIIX would change the way business is done. We expected to attract a high-quality team and experience steady growth, but of course we are thrilled with these results. We believe in solid, long-term growth in revenue, but we are pleased with the acceleration of sales in recent months. Representatives deserve to be treated well, and progressive growth for everyone is what happens when you’re willing to do that.”

ARIIX is a global opportunity company using the latest research to create leading-edge health and wellness products. The company was born from the shared vision of business leaders in the health industry who wanted to create a unique company based on the Golden Rule of helping others to unleash their potential for good. ARIIX stands out with a combination of worldwide vision, outstanding industry experience and leadership, products of unrivaled quality, and the philosophy that when one person thrives, the whole community benefits. ARIIX currently operates in the United States, Canada, the Netherlands, Portugal, China, HongKong, Japan, Taiwan, Singapore, Russia, Ukraine, Kazakhstan and Mexico. For more information please contact Rick Billings at 407-733-3502.

Getting Started with ARIIX