Why Choose the Coenzyme Q10 in the ARIIX Omega Q 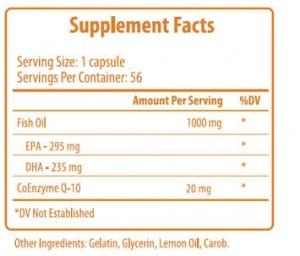 The Coenzyme Q10 in the ARIIX Omega Q is very similar in all aspect to that of the natural Coenzyme Q10 found and naturally produced inside of our bodies enabling it to blend naturally without any harm or side effects. Like the fish oil, the Coenzyme Q10 found in the ARIIX Omega Q is also generally recognized as safe for use in foods and beverages and is free of genetically modified harmful organisms that are known to cause various illnesses and diseases plus it is allergen free and Kosher-certified.

The Coenzyme Q10 found in the ARIIX Omega Q is made ONLY in the United States and manufactured according to the highest quality standards set forth by the FDA which is the reason why this kind of Coenzyme Q10 is unsurprisingly proven to be very safe in both humans and animals without any side effects whatsoever even with daily clinical doses of up to 3000mg.

Finally, in ARIIX’s commitment to offer us only the best and highest quality possible, it gave us another layer of health promoting benefit by transporting the Coenzyme Q10 found in the ARIIX Omega Q to the human body using a healthy type of oil known as virgin olive oil instead of using cheaper and not so safe inferior oils commonly found in most nutritional brands such as glycerin, soy bean oil, and Maltodextrin.