Magnesium has become the celebrity mineral. 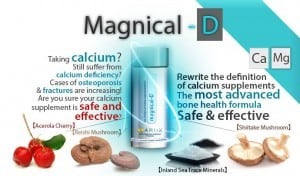 It’s in demand, making media appearances everywhere. Magnesium has become the mineral of discussion in medical circles, while also being featured in the biggie medical journals. Rightfully so, as it helps the body run over 350 enzymes, which are involved in everything from energy creation to building our DNA. Sadly, it’s estimated that 80% of us are deficient in it. Deficiency develops because many people don’t supplement with it, and generally eat cookie-monster style.

When you supplement with it, choose MAGNESIUM GLYCINATE, which is the kind that has an amino acid attached to it. This helps with full absorption, and doesn’t cause diarrhea commonly associated with high doses of magnesium citrate.

ARIIX launched magnical-D as a product to help support bone growth and muscle function. Magnesium is involved in both, as are several other ingredients not commonly found all-in-one.

Vitamin D, well known for its role in calcium transportation in the body, is also deficient in ~41% of us. Deficiency is linked to lack of sun-exposure, and absorption issues (digestive diseases being the main cause of this).

Vitamin K2 is a smart little guy. It actually works to make sure calcium stays inside bones and teeth where it belongs, rather than sneaking into soft tissues such as the muscles and heart

Calcium:Magnesium ratio – we did it right! This product contains a 1:1 ratio of calcium:magnesium, rather than 2:1 or higher. See, magnesium plays a greater role in bone health than we previously knew, while too much calcium has been found to be detrimental. According to a recent article by Dr. Mercola, magnesium is farmed out of the soil to a greater extent than calcium, making it pretty critical to supplement with.

The final 4 – we’ve rounded out this product with a trace mineral complex, acerola cherry, shiitake mushroom and reishi mushroom extract. Medicinal mushrooms have been used for years to boost the immune system, while compounds such as acerola cherry offer additional immune support via antioxidants.

Thanks ARIIX for developing this!

To try our new Magnical-D product contact me directly.